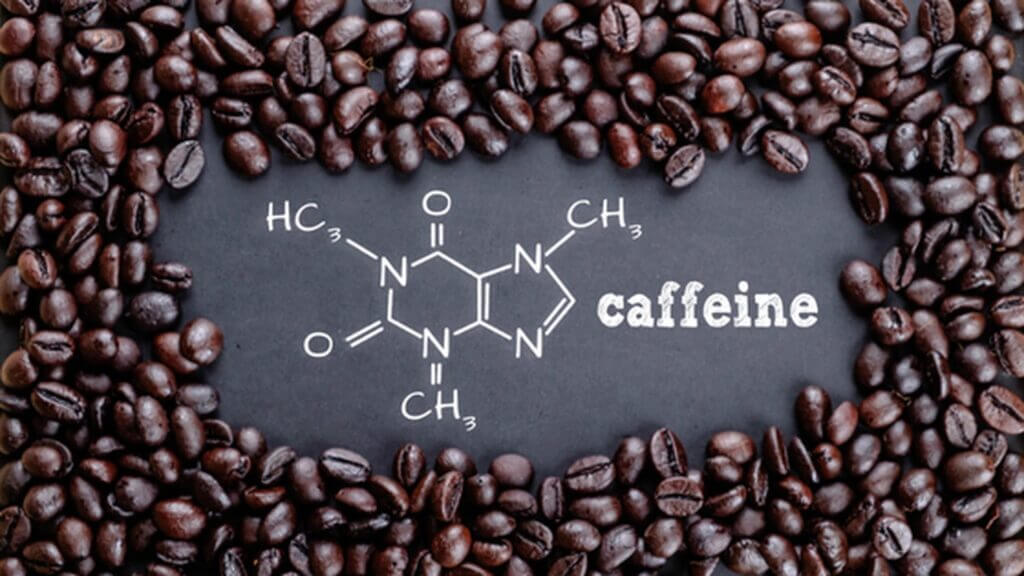 No Way decaf for me!

You should not think that way about Decaf until you learn more about it. Caffeine in coffee, is a substance that acts as a stimulant through the central nervous system. Most people drink regular coffee to counteract tiredness and improve concentration and focus. It also tastes great, and sometimes based on how much you drink, it can become addictive.

Below I have outlined some interesting facts about caffeine, and why some coffee lovers will include decaf as part of their daily routines.

-Caffeine was first found by a German chemist in 1819. If you spray caffeine on plants, it can be useful as a natural and organic pesticide. It will kill damaging insects that attempt to feed on the plants, but not harmful to people. The industry will purify caffeine as a white crystalline powder that is somewhat bitter and is added to soft drinks to give it a slight pleasant bitter taste

-We understand that Caffeine can become to most people an addictive stimulant. Which is the reason most coffee lovers enjoy their caffeine in their cup of Joe, to get that nice boost at the beginning of their day.

-Caffeine is a stimulant, and it can affect the heart rate and has some mood-altering. People feel good to have a great cup of coffee in the morning, meetings, or with friends.

-There are different schools of thought about what a normal dose of caffeine should be but it’s generally recommended being 100 mg to 120 mg, which is about the amount found in a small, or medium cup of coffee. However, more than 50% of all adults consume 300 mg to 500mg of caffeine on a daily basis, which makes it one of the most popular stimulants consumed as a legal drug.

-A simplified explanation for caffeine to aid wakefulness, is that caffeine blocks certain receptors in the brain. The result is the adrenaline release, which increases heart rate, blood pressure, and blood flow to muscles. This helps many students, overworked professionals, and travelers driving long distances. Some people with low blood pressure, believe that small amounts of coffee elevates their blood pressure to normal.

-On a positive side, caffeine is quickly and completely removed from the brain with no long term effects or negative affect brain functions. However, high caffeine usage tolerance can cause the body to have some withdrawals which in term can cause blood pressure to drop, headache, and possibly other symptoms. Exceedingly high caffeine may cause caffeine intoxication, characterized by nervousness, excitement, increased urination, insomnia, and intestinal issues.

-The lethal ingested dose of coffee for an adult is estimated between 10- 20 grams which has the equivalency to be between 50 and 100 cups of coffee, which is almost impossible to achieve. But if an adult ingests a tablespoon-sized amount of pure caffeine, it would be lethal.

-Depending on which day it is, or what news station you listen to, there are many reports that provide you with the latest findings on the health effects of 3-5 cups of coffee per day. Medical research on Coffee intake stated that coffee may offer some protection against:

All Type of Diabetes

Liver Disease, cancer of the Liver,

Most people’s coffee drinking habits are probably average(2-4 cups per day), but it is always good to listen to medical expert advice to cut back on consumption or switch to decaf if you have heartburn, nervousness, or insomnia. Every one is different and needs to understand how are caffeine products affect them, and follow medical suggestions

How is Decaf different from Regular Coffee?

For anyone looking at decaffeinated coffee, it looks the same in appearance and tastes the same as regular coffee, but the main difference is in the composition. Decaf contains a fraction of caffeine or is at least 97% caffeine-free, based on FDA compared to regular coffee. There is no convincing evidence, or any proof to date that brings to light, that drinking decaf has negative effects on a person’s health, but decaf coffee could have some health benefits of regular coffee including high antioxidants levels.

As a coffee lover, I love regular coffee, but if I drink it after 4 pm, it affects my sleeping patterns as it does for many other coffee drinkers. So, I can drink my favorite decaf coffee in the evening without disturbing my sleep. Some coffee lover friends I know, can drink regular coffee at any time of the day and sleep very well without any issues. Caffeine affects everyone differently.

So, how is decaf made?

-Solvent-based decaffeinating uses Ethyl acetate or Methyl chloride for caffeine extraction. These chemical solvents are used directly with green coffee beans to dissolve the caffeine. The FDA has approved this method as a safe process of caffeine removal from coffee beans without health risks to coffee drinkers, but some coffee connoisseurs believe that this method detracts flavor and aroma compared to coffee decaffeinated by other methods.

When you purchase decaf coffee with the label stating “naturally decaffeinated”, it is likely that coffee was decaffeinated using the solvent-based process.

-The Carbon Dioxide (CO2) Method is a current process that was developed by a scientist of the Max Plank Institute and uses liquid CO2 in place of chemical solvents which cause the alkaloids to be released. In the CO2 decaffeinating process, the green coffee beans after thoroughly washed with water, are placed in a stainless steel extraction container. Then, the liquid carbon dioxide is forced into the coffee at high pressures to extract the caffeine.

Next, the caffeine-free carbon dioxide gas can be reused again in removing caffeine from coffee beans. This process is cost-prohibitive, it only makes it efficient with a large volume of coffee used by grocery stores chains. 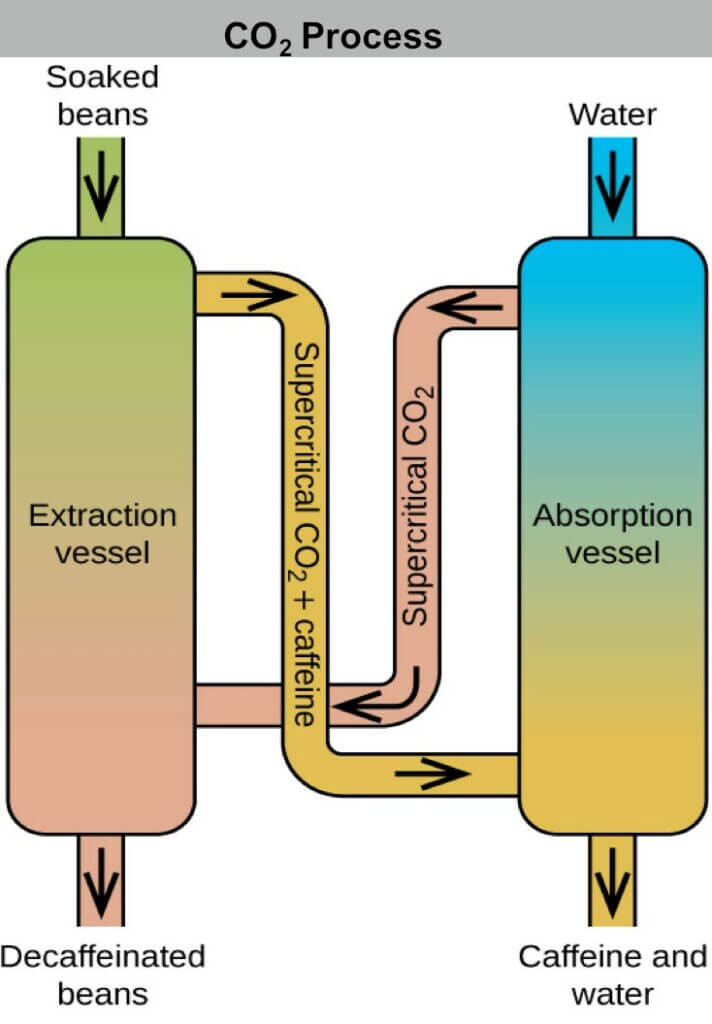 Today’s Swiss Water decaffeinating method was created by a scientist in Switzerland in the 1930s. This process was commercialized and used in high volume in the 1980s and continues to improve over time. The Swiss Water Decaf is a process in which coffee is decaffeinated using an Eco friendly, chemical-free, 99.9% caffeine-free water process and all the while preserving the same great taste as regular coffee at the same time.

All these processes have similar results in that, it takes the green, coffee beans, and extracts the caffeine until it leaves the coffee bean with at least 97% caffeine-free.

In my opinion, Carbon Dioxide and Swiss water methods are considered chemical-free, but the solvent method relies on synthetic chemicals even though the FDA approved the process and considers it healthy and safe.

The Swiss Water Process has been proven to produce the cleanest, natural, and most flavorful decaf coffee because it’s efficient at extracting caffeine without stripping other flavorful and aromatic compounds from the un-roasted green beans. But it’s also more expensive and difficult to produce, unless it’s at scale in high volumes.

Why do people use decaf??

There have been researching, and polls for average people reason for using decaf coffee. Below decaf coffee drinkers respond to the question – why do they drink decaf.

-My body has a sensitivity to caffeine. After I drink just one cup of coffee will keep me up for at least 8 hours. So , in order for me to sleep that night, my next cup has to be decaf.

-It doesn’t keep me up, but I get heart palpitations if I drink even one cup

-I drink decaf because I’m pregnant.

-lots of people who like the taste of coffee, yet don’t want a caffeine-hit will drink decaf coffee

-After coffee, my heart rate increases and sometimes it makes me short of breath. My doctor told me that caffeine may be a trigger for my anxiety.

-I usually only drink decaf late at night, when I want the taste without being unable to sleep later

-My dad used to drink so much regular coffee, that he would go through withdrawal if he went without a cup of Joe for a couple of days.

-The one person I know that drinks decaf says it’s because she has diabetes and heart problems.

In today’s complex world there are choices for coffee lovers to drink regular coffee, or if they cannot, for whatever reason they can switch to decaf without losing the flavor, aroma, or taste but without the effects of caffeine. In other words you can still enjoy, and savor a decaf cup of Joe.

So, if you’re a coffee lover, and love that daily morning nectar, it all depends on how your body reacts to caffeine. Some coffee drinkers have different sensitivities to the effects of caffeine than others. If you don’t have any reactions from drinking regular coffee, keep enjoying that cup of Joe. But always remember moderation, and try to regulate your caffeine consumption to no more than 400 milligrams per day (2-4 cups, depending on how strong you usually make your coffee).

If you’re like most coffee lover adults, regular coffee is a part of your daily routine habit, and most likely it will not pose a health problem. But you need to understand caffeine’s possible side effects and be ready cutting back, or alternate with decaf coffee if necessary.

If you’re shopping for decaf, and the bag has the Swiss Water logo on it, you can rest assure that no chemicals were used to extract the caffeine from the coffee, and has the same flavor and aroma as regular coffee. As a coffee lover, that sounds to me like a winning combination.

If you have any comments, please leave them below, I’d love to hear from you.