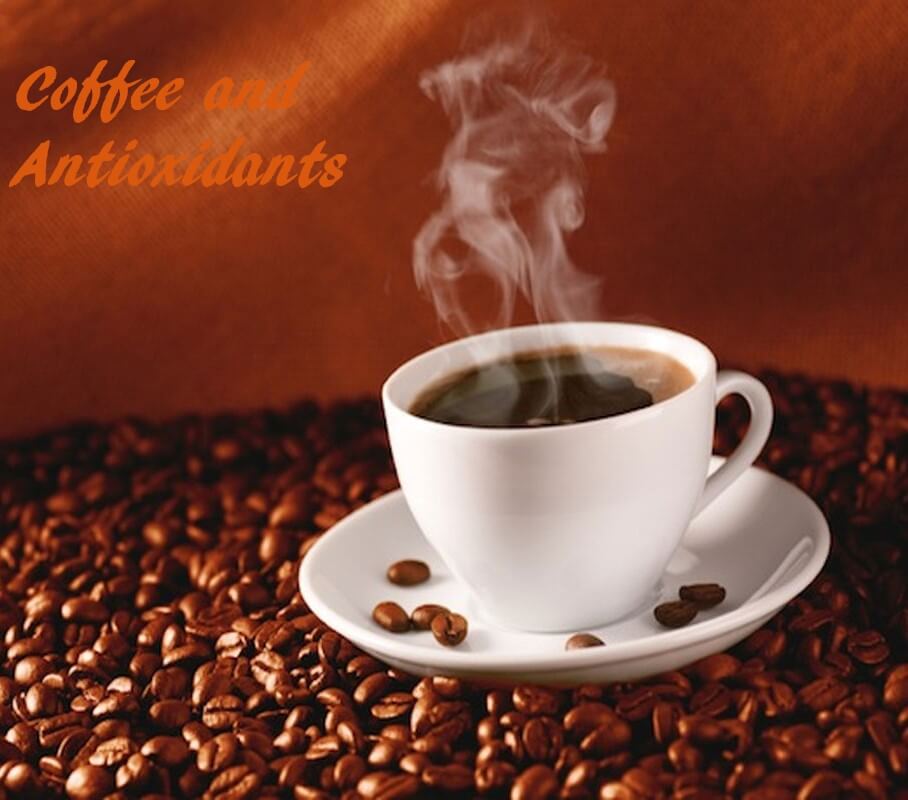 Despite multiple opinions we have about coffee, and read various studies regarding the effect of coffee on health, we will find out that it is believed to be beneficial. Some health benefits of coffee include reduction of risk of liver diseases, type II diabetes, and Alzheimer’s.

What is an antioxidant? An antioxidant is a molecule that protects cell damage and cell death in human cells. This is the simplest way I can explain it. Our body cells go through a process called oxidation which creates free radicals and causes’ our cells to age prematurely and other cell damage over time. Antioxidants protect us from this cell damage. 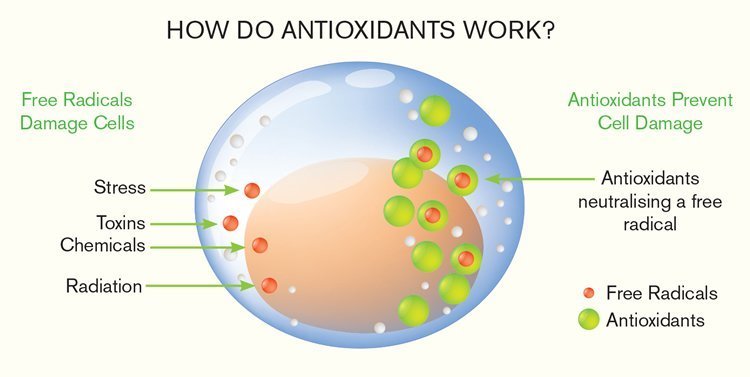 The Biggest Dietary Source of Antioxidants

Many people consume about one to two grams of antioxidants per day; these antioxidants are ingested primarily from beverages like tea and coffee. Beverages have larger antioxidant content than normal food.

About 79% of antioxidants received from diet, usually comes from beverages. The remaining 21% comes from the food we eat. This is because people tend to drink more beverages that have a high percentage of antioxidants than food that also contains them.

There was research done to know the percentage of antioxidants present in food based on the size at which they are served. Coffee was 11th on the list with other types of berries ahead of it. This doesn’t still matter; people only eat a few berries but they can take many cups of coffee in a day. 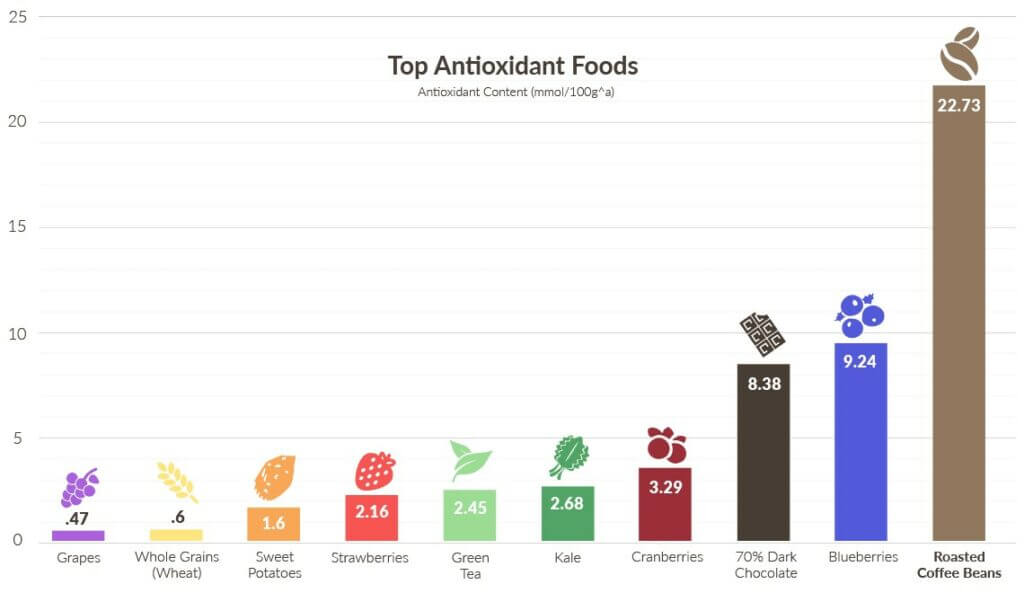 The amount of antioxidant that is provided by coffee is greater than that of berries, even though berries are richer.

Over the years, many types of research have been done on coffee and we have started discovering the secret to the many health benefits that coffee has. Coronary heart disease, type II diabetes, Alzheimer’s disease, and fatty liver diseases; drinkers of coffee have a lower chance of developing any of these diseases.

Some of these antioxidants are CGAs and chlorogenic acid. As we live on this planet with a lot of things to do, a lot of factors can cause stress for our body – from the food we eat to the water and the type of air we breathe in. 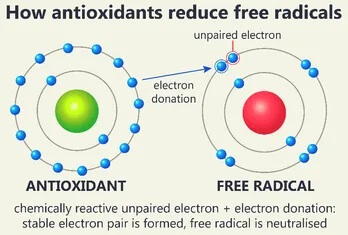 These factors cause an excessive buildup of some compounds in our body and the release of some substances called free radicals. It is not possible to stay away from these substances because they are everywhere.

Oxidation stress causes’ a change in the cellular structure that leads to some diseases we have mentioned above. So many factors that surround us like oxygen, nitrogen, pollution, UV light, eating low-quality or fast food, and taking alcohol all cause these harmful substances to build up in our body.

These free radicals damage brain tissues, skin, and they cause cognitive function diseases and wrinkles on the skin. It can also accumulate on the wall of blood vessels which may cause cardiovascular diseases.

Radicals can alter cell reproduction process leading to the growth of cancerous cells. Antioxidants have the ability to nullify the effects of these free radicals; this means they can protect the body from the free radicals.

Therefore, the health benefits of coffee don’t come from the caffeine you drank to keep you awake. By drinking a healthy cup of coffee, you are restoring the health and integrity of the cells in your body.

Now, you may want to ask; what are the things free radicals do in the human body? The oxidation stress that is induced by these radicals in the body causes inflammation of the body.

It has been shown that chronic inflammation is the cause of some diseases that affect the human body. When the inflammation in the body is prolonged, this is what actually causes those diseases.

This is something we should take note of; inflammation itself is not a harmful thing. It’s this inflammation that helps our wounds to heal. When there is a cut in the body, there will be some inflammation due to an accumulation of cytokines in the wounded areas. 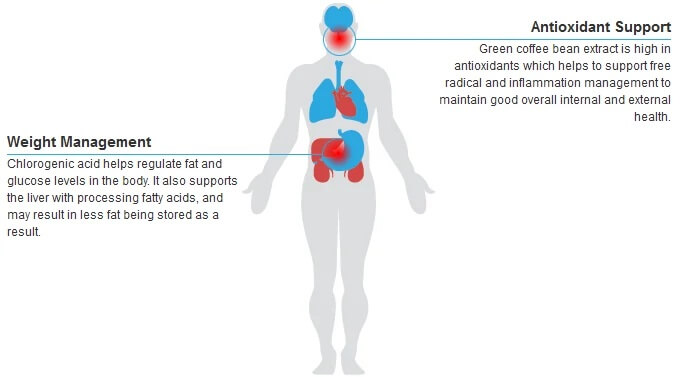 Cytokines then induce swelling up of the region and signals are passed to the other parts of the body. As the area swells up, it allows the easy passage of substances across the blood vessels.

The blood vessel will allow for the passage of hormones and immune cells that will fight the foreign bodies. It’s normal for the wounded area to swell up, but when the swelling refuses to go down, it’s not a healthy situation.

They come as a pain, aches, and diseases that you won’t notice until the damage has been done. The only way the body counters the effect of these radicals is through the antioxidants present in the body.

After a lot of observational research, scientists have concluded that coffee’s high antioxidant effects reduce the risk of these diseases. Currently, there are many studies that agree with this conclusion.

Linked to a Reduced Risk of Many Diseases

Drinking coffee is also beneficial to the liver; it reduces the risk of having liver cirrhosis. Coffee can also reduce the risk of stroke, heart diseases, and colorectal cancer. People who drink coffee have been reported to have a lower risk of having Alzheimer’s and Parkinson’s disease.
Coffee has also been reported to have a beneficial effect on the overall mental health of people. Some studies found that women who drink often have a lower chance of depression and suicide.

Lastly, coffee has been linked to an increased lifespan; it lowers the risk of premature death. You should note that these studies are observational and there is no concrete evidence to back up these claims.

Even decaffeinated coffee will still contain the antioxidant called Cafestol. It acts as the bile modulator in the human body. The Cafestol also acts as an anti-inflammatory agent in the human brain. According to a study, this antioxidant helps improve memory.

Trigonelline is an antibacterial compound and can help one prevent tooth decay. The compound is one of the bitter alkaloids that are present in coffee. It adds a special type of great aroma to the coffee.

Green and roasted coffee have a great percentage of chlorogenic acid in it. Chlorogenic acid is a phenol compound, and it is one of the major antioxidants out there. It acts as an antibacterial and anti-inflammatory agent in the body.

The chlorogenic acid contains some lactones and this has been found to tackle diabetes in the body. Green coffee has been said to the primary source of Chlorogenic acid. Research has shown that Chlorogenic acid reduces fat deposition in rats and increases their rate of metabolism.

The Melanoidin that is present in coffee is the cause of the special smell that comes from it during roasting. This compound is also responsible for the brown color of coffee.

The compound of this antioxidant is formed during the roasting of coffee and they have great anti-inflammatory and antibacterial properties.

This bitter compound is responsible for the bitter taste of coffee, and it has antioxidant properties. The quinine in coffee becomes more effective when it is roasted. Taking large quantities of quinine is harmful to the body, and some people are allergic to it. However, only a small amount is present in coffee and it is not harmful.

Caffeine on its own is an antioxidant; it helps to cure headaches, lose weight, and prevent diabetes. Recent studies show that caffeine has a similar structural formula to uric acid. Caffeine can be used to treat redness of the skin, puffed skin, and the likes.

Many people have different opinions on coffee, but it has been established that coffee has a lot of health benefits. In this article, I have reviewed the source of the many health benefits of coffee. So, basically high level of antioxidants found in coffee-based on many studies, are very healthy for you.

6 thoughts on “Coffee and Antioxidants: All You Should Know”